Faces at the Bottom of the Well
The Permanence of Racism
by Bell, Derrick

Silent Covenants
Brown V. Board of Education and the Unfulfilled Hopes for Racial Reform
by Bell, Derrick

Confronting Authority
Reflections of An Ardent Protester
by Bell, Derrick

And We Are Not Saved
The Elusvie Quest for Racial Justice
by Bell, Derrick

The New Jim Crow
Mass Incarceration in the Age of Colorblindness
by Alexander, Michelle

When Equality Ends
Stories About Race and Resistance
by Delgado, Richard

The Rodrigo Chronicles
Conversations About America and Race
by Delgado, Richard

We Won't Go Back
Making the Case for Affirmative Action
by Lawrence, Charles

White by Law
The Legal Construction of Race
by Haney-López, Ian

The Alchemy of Race and Rights
by Williams, Patricia J. 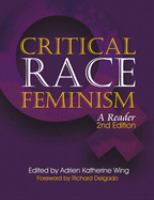 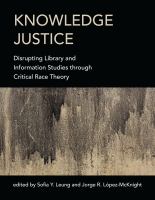 How "Indians" Think
Colonial Indigenous Intellectuals and the Question of Critical Race Theory
by Lamana, Gonzalo

Race, Gender, and the Activism of Black Feminist Theory
Working With Audre Lorde
by Nayak, Suryia

All copies in use Availability details Holds: 1 on 1 copy
Place hold
Add to My For Later Shelf On my shelf

From Class to Race
Essays in White Marxism and Black Radicalism
by Mills, Charles W.

Philosophy of Race
An Introduction
by Zack, Naomi

The Myth of Race
The Troubling Persistence of An Unscientific Idea
by Sussman, Robert W.

The History of White People
by Painter, Nell Irvin

So You Want to Talk About Race
by Oluo, Ijeoma