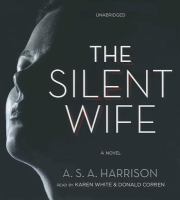 Jodi and Todd are at a bad place in their marriage. Much is at stake, including the affluent life they lead in their beautiful waterfront condo in Chicago, as she, the killer, and he, the victim, rush haplessly toward the main event. He is a committed cheater; she lives and breathes denial. He exists in dual worlds; she likes to settle scores. He decides to play for keeps; she has nothing left to lose. Told in alternating voices, The Silent Wife is about a marriage in the throes of dissolution, a couple headed for catastrophe, concessions that can't be made, and promises that won't be kept.
Publisher: [Ashland, OR] : Blackstone Audio, p2013.
ISBN: 9781482911558
1482911558

This one received a lot of comparisons to Gone Girl, but I didn't think it lived up to that kind of hype. It's an interesting look at a marriage gone wrong and what happens when you keep emotions and the past bottled up.

By all accounts Harrison's sleeper hit is this year's Gone Girl. Let's see: couple's relationship is on the outs, check; psychological thriller, check; keeps you guessing, check. The next Gone Girl? Perhaps. Definitely worth checking out if you're looking for an engaging read with twists and turns.

I liked the audio book version of this suspense/ thriller, the narration was great. I was captivated right until the end with its fast paced story and alternating "his" and "hers" chapters. I found it interesting how deeply flawed every character was and yet it did not stop me from very much enjoying the story in all its twists and turns.

The story is told in alternating voices of main characters, Todd, and his common-law wife Jodi. The couple’s seemingly perfect relationship, which includes flourishing careers and a luxury waterfront condo, unravels in the aftermath of Todd’s adulterous lifestyle.

Both characters are unlikeable. But the author’s meticulous account of Jodi’s unspoken turmoil, set against the picture perfect view from the calm of her tony surroundings, kept me turning the pages.

It is unfortunate that this Canadian author passed away from cancer just months before her first novel was published. (Submitted by TS).

I think I would have really loved this movie but - no cc.

Picked up this book after reading the back, started reading it and briefly considered returning it. Then it turned up on my Pinterest feed and after reading the reviews that stated it could be compared to Gone Girl (which I loved) I decided to give it another go. In my opinion it isn't really a lot like Gone Girl aside from what other reviewers have said about it being written from a his and hers perspective. I didn't find Todd or Jodi particularly unlikeable and while a little slow at the beginning, I found it did pick up halfway through. I am still left wondering about the Jodi/Darrell/Ryan side story, which left me confused. I would in no way qualify this book as a "thriller" but with what some consider to be a twist at the end, this is a decent book.

A top-notch read. It is bit slow to get going but by the middle it has picked up momentum and there is a great twist at the end.

It was just ok.

The dynamic was interesting. I enjoyed the joint narration. It kept me interested, but in the end left me wanting. Perhaps knowing the final outcome before you even dive in doesn't help in this case. I rated it with two Stars, which to me means, "I should have read/listened to something else... but I'm no worse for the wear."

This was no "psychological thriller". It put me to sleep rather than keeping me engaged. Everyone in the book was messed up and complacent in life so I didn't feel sorry for anything that happened to them.

katethebookie thinks this title is suitable for 21 years and over

Other people are not here to fulfill our needs or meet our expectations, nor will they always treat us well. Failure to accept this will generate feelings of anger and resentment. Peace of mind comes with taking people as they are and emphasizing the positive.

Life has a way of taking its toll on the person you thought you were.

Death should be a seduction, not a rape.

The cover of this book bills it as another "Gone Girl". It really isn't, but it was a good read nonetheless. Jodi is the wife of a real estate developer in Chicago. Her husband, a serial cheater, falls for and impregantes the daughter of his best friend. Told thru the eyes of both Jodi and Todd, the story unravels the emotional rollercoaster of both characters. I became totally absorbed in the story. The authors writes Jodi as a tad emotionally aloof, which is who she really is. Todd is played as a man ruled by basal instincts - even though he cheats on Jodi, he deeply loves her. Some unrealistic events bring the story to its climax, but, for the most part, the characters were probably more believable than those in Gone Girl.

The story of a shaky marriage which reaches a crisis point when Todd gets his friend's daughter pregnant, and his wife Jodi is persuaded to hire a killer. Makes you reflect on the importance of communication and honesty in any relationship. I like the way it is told from both his and her perspective, and the way you don't know how it will end until the final pages.