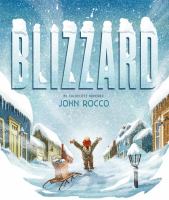 I read this in my Preschool Storytime. I explained to the children that this is about a REAL blizzard and the adventure of a little boy and his family. I made sure to show the children the picture in the back of the book of the REAL boy in the story.

Have you ever wanted to take an adventure in the snow? Well author John Rocco takes readers with him as he saves the day for his family and neighbors in this adorable story of the 1978 blizzard that hit the northeast. It's a fun ride and John's character demonstrates bravery which pulls children into the story.

Following in the footsteps of his award-winning Blackout, is Blizzard, Rocco's second ingenious picture book about an incident that brings people together. In this case the story is based on the author's own experience of the 1978 blizzard that covered much of New England. As flake after flake falls, his family hunkers down in their home, finding out the next day that their entrance is blocked by snow, and they have to exit through the windows! After a few days they start to get hungry, and with no snowplows in sight, the little boy straps a pair of tennis rackets on to make his way to the grocery store, first stopping at the neighbours and at anything fun along the way of course. These days of mountainous snow were inconvenient, if not horrendous for most, but this soft-lined, rounded style with warm colours juxtaposed against the blue and white backgrounds gives a more cheery impression of events, even when the words specify otherwise. As much as this is a tale of one boy's brave excursion to the grocery store, it is also about a family and how they pulled together. We see dad shovelling away, and mom keeping the troops warm and fed. The little boy even spreads the goodwill to the neighbours by bringing them a little food too. Such a heartfelt warm story just melts the cold right away.

Great story based on the true experience of the Author as a 10 year old boy . How he got to the store over a mile from his house with tennis rackets tied to his feet. He was the one to go as he was the lightest one weight wise to use the tennis rackets and pulled a sled to get needed supplies . Good book and great illustrations .

Great story about a child saving the day during a huge blizzard.

When the first flakes began to fall, the class was very excited. More snow followed, and outdoor recess was lots of fun.

The snow continued, growing heavier, and the wind whipped up. School closed early. The children walked home slowly, the snow already over their boots.

The storm didn’t let up that night, and the next morning, the drifts were very high. Soon, the snow was too deep for walking, tobogganing, or driving. It was a blizzard!

As the days passed and the snow continued to fall, food and other supplies began to dwindle. People began to feel cabin-crazy. Still, the snowplows did not arrive.

On the fifth day, a young boy decided to use an idea from his Arctic Survival book. Using tennis rackets as snowshoes, he discovered that he was light enough to walk on top of the snow. Tugging his sled, he made the long trek to the local store, taking requests from his neighbours on his way.

Then the boy made the purchases and delivered them to his grateful neighbours and family.

At the end of the next day, the snow finally stopped falling. The plows arrived. The blizzard was over – at last - and everyone in the neighbourhood was safe.

This tale is based on a true incident from the author’s childhood, the massive 1978 New England Blizzard in which entire communities were cut off from civilization for days. (Unfortunately, there were over fifty deaths as a result of the real blizzard.)

John Rocco’s wonderful story of a young boy’s resourcefulness and courage, illustrated in watercolour and pencil by the author, gives the reader the sense that they are actually in the story. As such, the book would be especially enjoyed under a warm blanket!