WDCB Jazz – Jammin’ in the Stacks with Thaddeus Tukes and Friends 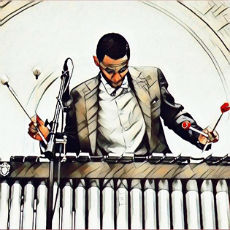 Thaddeus graduated from Whitney Young Magnet High School on Chicago's Near West Side, and is a 2016 graduate of Northwestern University, where he studied Jazz Vibraphone and Piano, and Journalism. He is the first person in the country to receive a degree in jazz vibraphone from a non-conservatory university, public or private, and was the first student to major in jazz vibraphone at Northwestern. Among other awards and distinctions, in 2015 Tukes was named a Luminarts Jazz Fellow.

This program is presented as part of the 2017-2018 One Book, One Chicago season, exploring the theme "Music: The Beat of Our City" through Greg Kot's book I'll Take You There.

Program:
One Book, One Chicago
Suitable for:
All Ages