Events › Author Lisa Randall Discusses "Dark Matter and the Dinosaurs: The Astounding Interconnectedness of the Universe"

Author Lisa Randall Discusses "Dark Matter and the Dinosaurs: The Astounding Interconnectedness of the Universe" 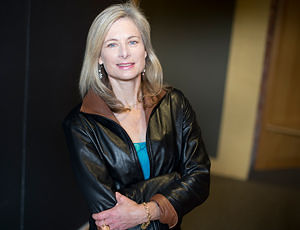 Acclaimed author and physicist Lisa Randall makes a highly anticipated return appearance to discuss her new book, Dark Matter and the Dinosaurs, in an event co-sponsored by ISC/Illinois Science Council.

In Dark Matter and the Dinosaurs: The Astounding Interconnectedness of the Universe, Randall tells a breathtaking story that weaves together the cosmos' history and our own, illuminating the deep relationships that are critical to our world--and the astonishing beauty inherent in the most familiar things. "Dark matter" and "dinosaurs" might sound like an unusual pairing. This book explores a speculative scenario in which a disk of dark matter--the elusive stuff in the universe that interacts through gravity like ordinary matter, but that doesn't emit or absorb light–dislodged a comet from the Oort cloud that was ultimately responsible for the dinosaurs' extinction. Working through the background and consequences that led to this proposal, Randall teaches us an enormous amount—both established and speculative--about dark matter, our universe, our galaxy, asteroids, and comets--and the process by which scientists explore new concepts. Many people are fascinated by the idea of a multiverse—other universes not within our reach. But at least as fascinating are the many hidden worlds—both biological and physical—that we do have a chance to explore and understand. Dark Matter and the Dinosaurs teaches us about known structure in the universe and the solar system, speculates further about possible missing elements, and illustrates the importance of preserving the elements on Earth--so long in the making--that are vital to our existence.

Lisa Randall studies theoretical particle physics and cosmology at Harvard University, where she is Frank B. Baird, Jr., Professor of Science. A member of the National Academy of Sciences, the American Philosophical Society and the American Academy of Arts and Sciences, Randall is the recipient of many awards and honorary degrees. Randall was included in Time magazine's "100 Most Influential People" of 2007 and was among Esquire magazine's "75 Most Influential People of the 21st Century." Randall's books Warped Passages (2005) and Knocking on Heaven's Door (2011) were New York Times 100 Most Influential Books. Her eBook, Higgs Discovery: The Power of Empty Space, was published in 2012.

Seating in the Cindy Pritzker Auditorium is first come, first served (385 max.). Books are available for purchase and the author will autograph books at the conclusion of the program.